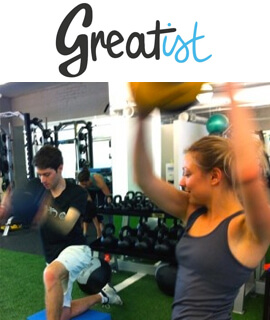 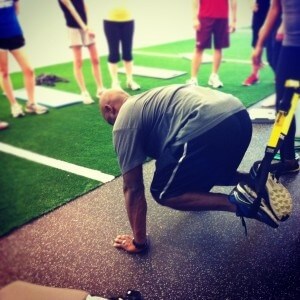 Somewhere in the middle of the battle ropes, sandbag lunges, and TRX sets, the friendly crew at Body Space Fitness told us to start smiling. But that’s exactly the point for the new, semi-private personal training studio located just west of Union Square. Body Space Fitness is as much about getting in shape as it is finding peace of mind and happiness in your health.

We quickly broke up into three teams — Team Ninja, Team Smiles, and Team “Jew ‘Fro.” Body Space Fitness is meant to get you fit and in shape, but it’s about improving the whole package, Kado told us. That attitude was evident when Greatist started its circuit. Team Ninja (Laura, Jordan, myself) started off down the turf, cheered on by the rest of the Greatist team close on our heels. We started with some simple exercises — knee lifts and lunges from one end to another, then moved on to an ab circuit using sandbags, medicine balls, and TRX Suspension Trainers. We were never doing the same thing for more than 30 seconds, which helped keep up the pace and prevent boredom. We then moved on to a series of metabolic circuits using a sled, battleropes, kettlebells, TRX rows, and sandbags.Upon walking into the bright, open gym, we were greeted by the friendly shouts of owner Kelvin Gary, and coaches Katherine “Kado” Simmons and Joanna Castro. The plan was to do a full circuit using the gym’s various equipment, including battle ropes, a sled, three TRX rigs, kettlebells, and more (there are also treadmills, a floor-length turf mat with 10-yard markers, and space for yoga).

The one downside of the workout was the amount we had to learn at every station, especially when nine people are doing something different — and switching — every half-minute. Once we nailed proper form, the circuits were a blast, and we’re sure on repeat visits the stations only gets easier and more effective.

The Greatist Team had a bunch of fun at Body Space Fitness. The coaches helped create a positive environment even when we were deep in the circuits. Body Space Fitness isn’t for everybody, even though there is something for everyone. People just looking to jog or lift in quiet might not care for the deep dive approach to training. The coaches all have multiple certifications and can create routines in a variety of systems. They can also pare down some of the more holistic elements (mind/body happiness) for those just looking to sweat. But Body Space Fitness is best for people trying to improve their overall health and fitness who don’t mind having some fun along the way.