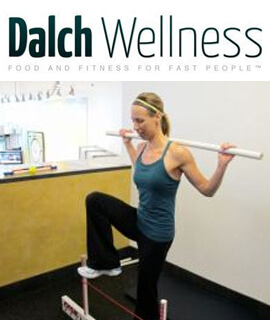 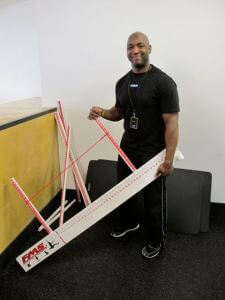 I recently had the great pleasure of meeting personal trainer Kelvin Gary. We were both working in a cafe near Union Square and began chatting about our similar paths to a career in fitness (we both came from corporate backgrounds) and about how we might work together.

Kelvin then asked if I would be interested in doing a “functional movement test.” Happy to be a guinea pig for anything fitness or food related, I agreed. Little did I know what Kelvin had in store for me this week.

First, what’s a functional movement test?  Functional Movement Systems, the company who developed the test, describes it as “the first dynamic battery of screens that helps to both prevent non-contact injuries and facilitate more effective training techniques.” It’s pretty basic, actually – a series of movements that you perform with a trainer versed in FMS concepts that determines your “functional movement” patterns.  The test gives the trainer clues about corrective exercises that might help you – either just in life or with performance in a particular sport. It sort of bridges the gap between physical therapy and athletic conditioning. 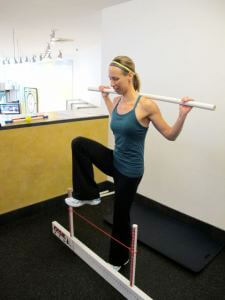 Here’s how it went.

I met Kelvin at the Equinox gym on 19th and Broadway, where he trains. He walked me upstairs to a secluded area of the floor where no one could hear me scream (kidding!). He then proceeded to talk me through seven different exercises designed to assess the mobility, stability, and range-of-motion of various joints; stability of my core; and whether the different sides of my body and muscle groups were playing nice together (ie, working symmetrically). The exercises:

Pretty basic movements – with the exception of the “Trunk Stability Push-Up,” in which you lie flat on the floor and raise yourself up into a full plank with your hands placed in front of your shoulders. I did it, but it was NOT easy! (You can find descriptions of the exercises on the FMS website.) 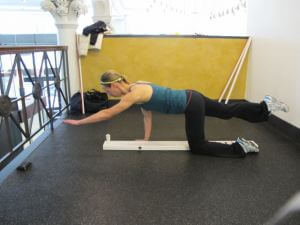 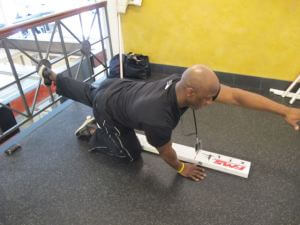 Under Kelvin’s trained eye, these simple (sort of) movement tests became tools for recommending ways in which I could improve my running performance and better prevent injuries. Kelvin explains:

So, yeah, I discovered that my right side is a bit stronger than my left and that my hips and ankles aren’t as mobile as they should be. (Not a huge surprise, I guess, given how many years I spent wearing heels to and from work.) All of this is likely contributing to the pain in my left knee when I run. The next day, Kelvin sent me a list of corrective exercises – along with links to YouTube video demonstrations of them – to address the ankle mobility as well as hip mobility and glute strength.

All in all, a useful (and fun!) way to spend 30 minutes. I’m excited to start using the exercises as I begin training for my next half marathon. If you’d like to get a Functional Movement Test with Kelvin, give him a shout on his blog, Fitness for Thought , or find him on Twitter.

What do you think? Would you benefit from a Functional Movement Test?